The Earl of Forfar today (Thursday) joined participants in the Walking Rugby project run by the award-winning Angus rugby charity of which he became Royal Patron 2020 and talked to some of the young volunteers it has developed into coaches as it celebrates its fifth birthday. As part of an afternoon of visits to community projects in Forfar, The Earl of Forfar visited the Inchmacoble Park home of Strathmore RFC, where Strathmore Community Rugby Trust, started by its chair, Stuart Gray, in June 2017, runs a number of projects designed to increase public participation in sport to benefit their health and well-being and develop young people into healthy, positive members of the community.

His Royal Highness Prince Edward heard about the aims, benefits and rules of play of the Walking Rugby project, for adults physically unable to play conventional rugby, from Community Project Leader Jim Kiely while seeing its coaches and participants playing, before joining in a short game himself and chatting afterwards with the players and coaches.

Next the Earl, who became the trust’s Royal Patron in August 2020 after seeing some of its projects on a visit to the town in 2019 accompanied by the Countess of Forfar, met trust staff and volunteers in the Clubhouse.

Most of them have progressed from the trust’s Rugby Academy – which provides secondary school pupils with life and rugby skills in term-time Friday afternoon sessions – to voluntary coaching of its award-winning Autism Friendly Rugby and on to becoming paid CPAs as well as playing for Strathmore RFC and pursuing sports-related careers via college courses.

Stuart Gray, Trust Chair, said: “We’re greatly honoured to have His Royal Highness visit the trust again, this time in his role as our Royal Patron, as we mark five years promoting and aiding health and wellbeing for all ages through our rugby-based projects.

“Thanks to all involved, including our funders and sponsors as well as our partners Strathmore RFC, Brechin RFC, Scottish Rugby and Scotland Rugby League, for their continuing support. We’re keen to speak to potential sponsors about projects we plan to launch in the coming months.”

The trust was founded in 2017 to increase public participation in sport, particularly rugby union and rugby league, in the Forfar, Kirriemuir and Brechin areas to benefit community health and well-being as well as develop young people into healthy, positive members of the community through the positive ethos and values of rugby.

It pursues those goals through eight projects, including rugby for primary children with or undergoing diagnosis for Autism Spectrum Disorder (ASD) and their siblings, Unified Rugby for adults and youths with disabilities and a Rugby Academy for senior school pupils to learn life as well as rugby skills.

More information about the trust can be found at www.strathmoretrust.co.uk. 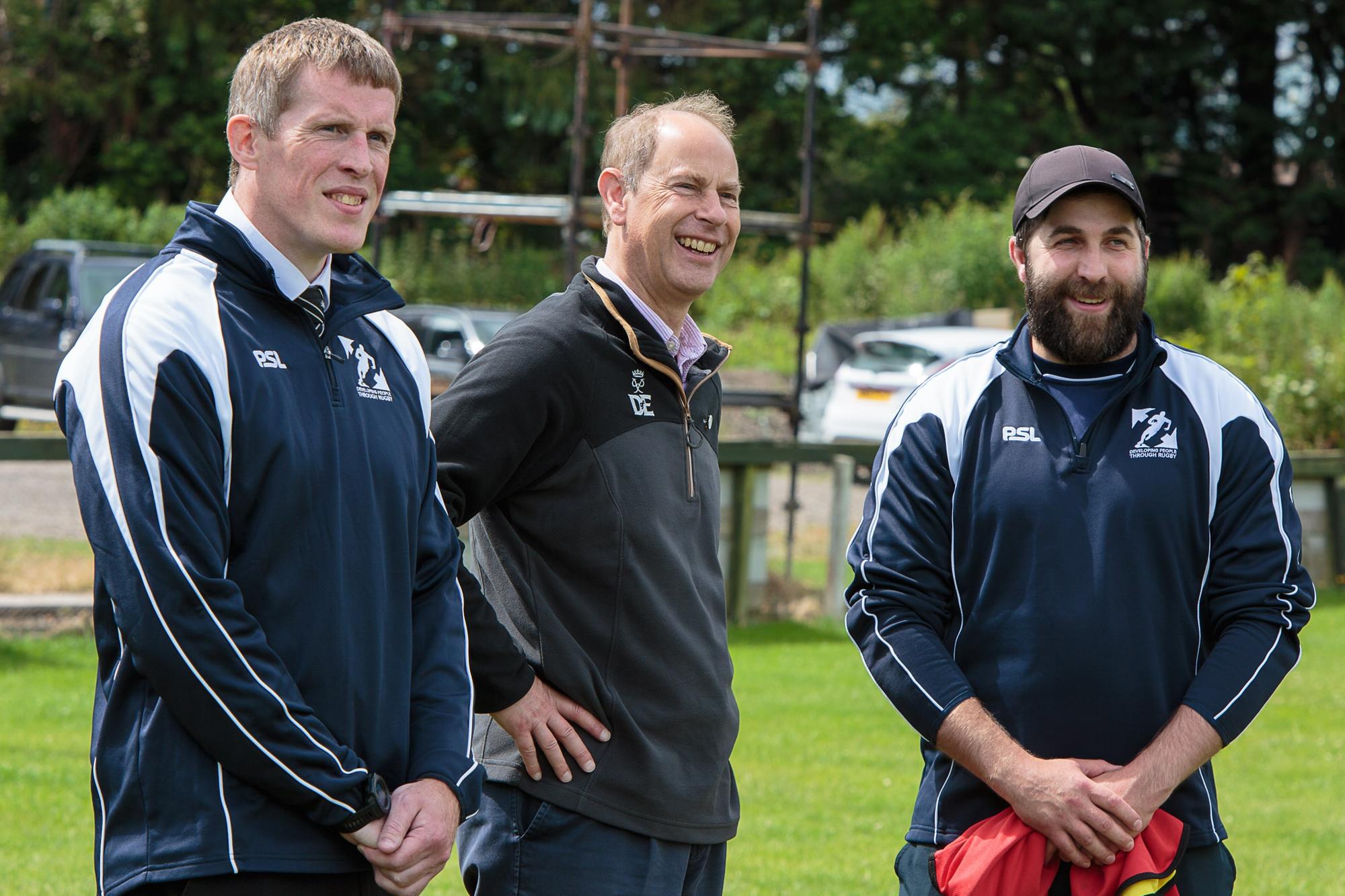 HRH The Earl of Forfar hears about the aims, benefits and rules of play of the trust’s Walking Rugby project from trust Community Project Leader Jim Kiely (right) while watching its coaches and participants playing. Also pictures is trust Chair, Stuart Gray. 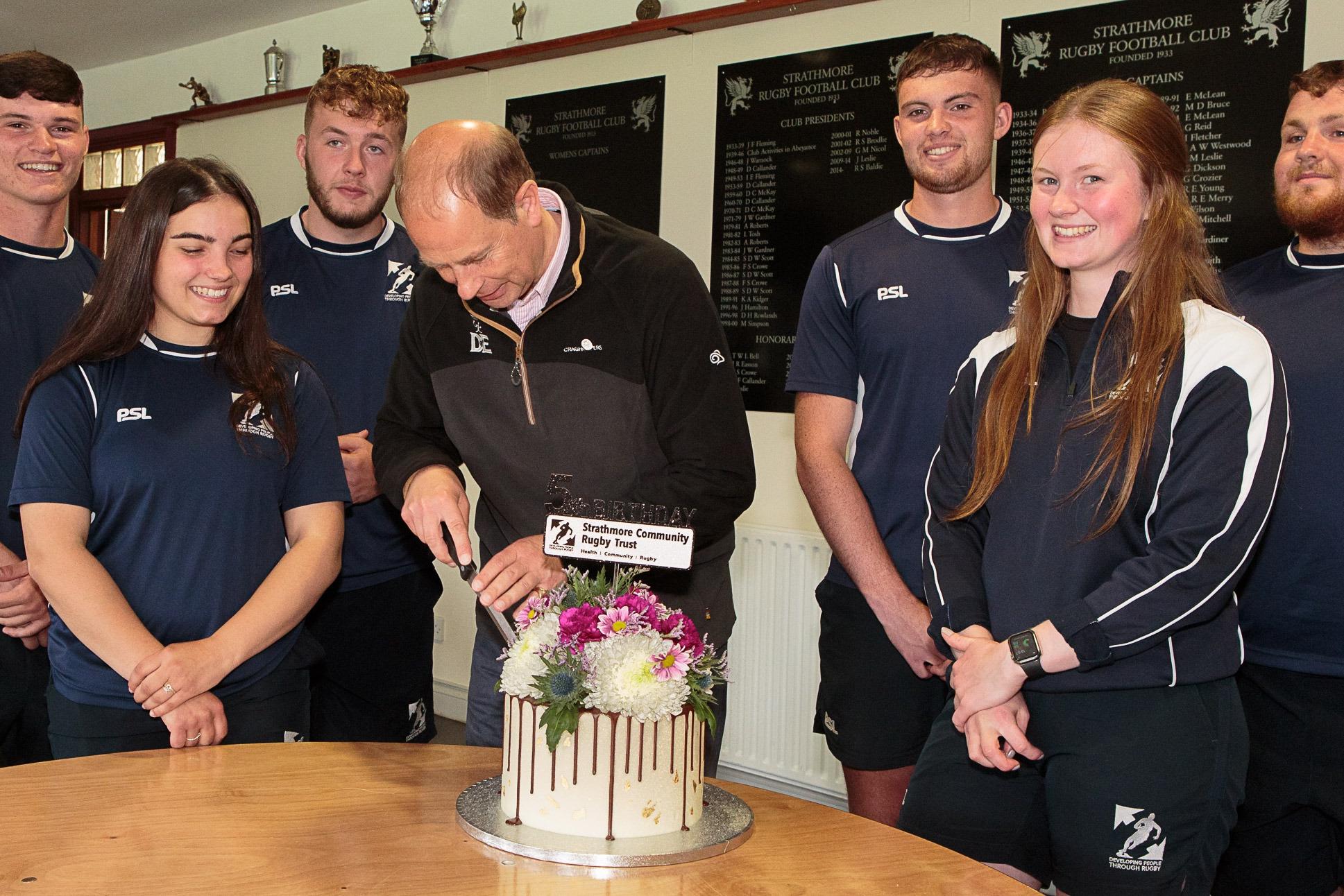